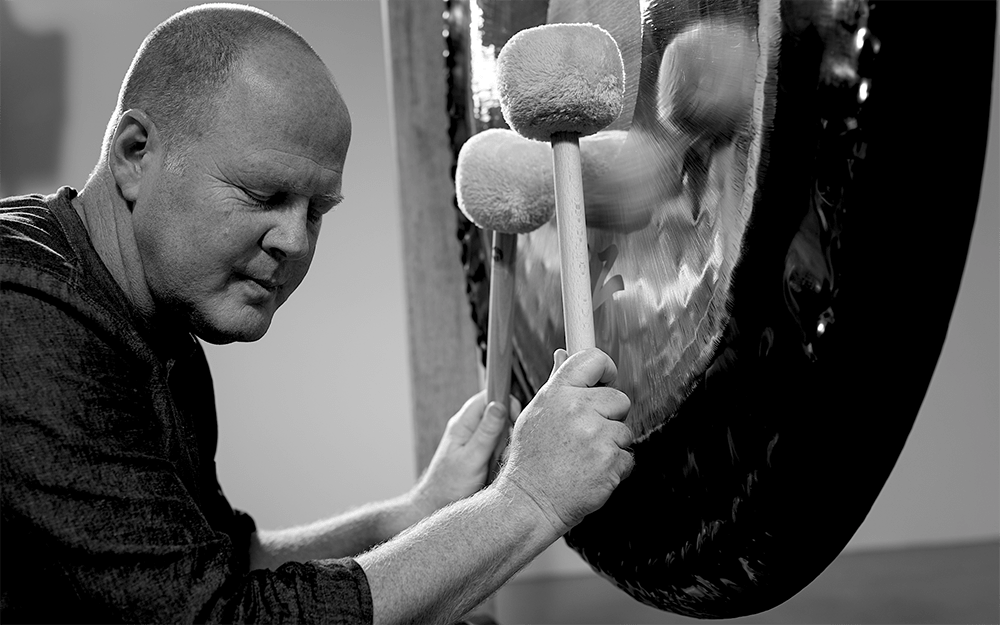 I get this question all the time. When people ask me what I do, I either reply by the general term ‘musician.’ or ‘I teach meditation.’ or, if I feel there is genuine interest, I tell them ‘I play gongs for people while they are laying down. I give gong baths.’ Huh?!?!?!? Gong bath? What is that? Then I explain that it is this amazing meditation through sound. Often there is interest in going to a gong bath, but still the following question is always the same. ‘How did you get started?’

Here is my answer.

It was a yoga class in Austin, Texas in 2005. At the time I was leading meditation groups in a program called The Joy Experience. Many of my clients raved about this yoga teacher. So finally when I got a chance, I went to his class. The class was fine, but not earth shatteringly brilliant, or anything. Then came the end of the class, the savasana, where you lay down for a few minutes and meditate. So I laid down and surrendered to the silence. All at once something happened unexpected that was to change my life forever. Immediately there was this emerging thunderous sound. It was a gong! I had never heard sounds like that. But more than it. It was doing something to my experience of who I was and what I was thinking and how my body was feeling. It took me to a whole other place. Super blissful. When it was over, about 10 minutes of it, I said out loud to no one in particular (or maybe I was just speaking to myself) I have got to get into this. A few months later there was a half day workshop, which really was just the yoga teacher playing the gongs for hours at a time and explaining some things to us. I knew then that I was going to get a gong and play.

Fast forward to January 2017. In the previous year, I had a beautiful baby girl, my dad had died, and a startup business I had founded and completely failed, taking with it my entire life savings.

Once I shut the doors of the business, I went back to what I do best. I did nothing. I hadn’t let myself do nothing for a long time. Don’t get me wrong, I had lots to do. I was taking care of an infant and also supporting my wife, who was in grad school. But, when I say I was doing nothing, I mean I had no project. I had no prospects, I had no goals or visions. I was the happiest man alive! 🙂 So that brings us to a January morning. I woke up and the very first thought was ‘Wow, I could play gongs now.’ Within 1/2 an hour of this thought, I got an email from my step-mom letting me know that I was to receive some unexpected money from my dad’s life insurance. When I read this my first thought was ‘Cool! There is the money for the gongs.’

That day I started researching gongs. A whole lot had happened with gongs since that 2006 yoga class. I couldn’t believe all the different gongs available. And they were expensive too. I was undeterred. I just kept reading and watching youtube videos, and eventually, as with so many considered purchases in life these days, I ended up on Amazon. Can you believe you can buy gongs on Amazon? Crazy, but then again, you can buy everything on Amazon, so of course. But anyway, as I was perusing gong listings on Amazon, something started getting my attention. What I noticed was that a certain person kept making reviews of certain high end gongs. It wasn’t just the reviews, it was that his reviews were BRILLIANT. It wasn’t just that he described details of the gongs and how they played with such eloquence, the words he chose to use was like a special code to me that said that me and him shared a certain intention along with a specific aesthetic. He always signed his name, M. Conners.

It suddenly became clear to me that I didn’t need to search for a gong. What I needed to search for was this M. Conners. So I took my fingers to the search bar and typed in ‘M. Conners Gong’ All the amazon reviews popped up first but then at the bottom of the search results, there was a web page for someone who called himself ‘The Vegas Gong Yogi.’ OK, so I went to his website, found the contact link, and wrote an email asking him if he was indeed the M. Conners of Amazon fame and if he was, would he spare an hour to talk with me about me purchasing a gong. He immediately replied that it was him and that we could meet tomorrow. We scheduled 1/2 an hour and ended up talking for 2 hours. Such a nice guy, and so generous. At the time of the conversation, he had a room full of gongs. Something like 20 of them. So I finally asked, ‘if the house is on fire and you have to take out one of them, which is it.’ He knew without hesitation it was the 40 Inch Wu Xing gong, made by the German gong making master Broder Oetken and sold by Meinl. I said, great. That is going to be my first gong, but then we decided I get two at once and after an hour of back and forth, I decided to get the next smaller Wu gong, the 36 inch. I bought them from Gongs Unlimited. One of the best online stores around. Super knowledgable and super friendly.

When the gongs finally arrived, I excitedly put together the gong stand and hung the gongs and immediately, for the first time ever played gongs…my gongs. That’s right. The first gong I ever played was my own gong. I became lost to the mundane vagaries of my daily life. I was transported to a new place. I was in love at first play and I was in heaven.

My initial idea was that the gongs were only for me, as a private thing. I had zero aspirations of sharing the sounds with groups, but Matthew had wisely predicted that I would end up doing groups. It is sort of shocking how quick that happened. Two days after the gongs arrived at my house, a friend show up at the door and I asked him to lay down on a yoga mat and let me play for him for a while. I had no idea what I was doing, but I decided to try to play the gongs using a basic structure of sound that I heard in Classical Indian music. It seemed to have worked. When I finished, he looked up at me, astonished. The look on his face told me all I needed to know. The next day my friend Brianne came over and something similar happened. In fact she said, and this quote still exists on my posters and website today, ‘That was like a massage times 10!’

It was at that point that I knew I had to start sharing the gong sounds and in a major way. I wasted no time. Within two weeks only I had my first gong bath! I didn’t really advertise. I had no website and no facebook, no posters or business cards. Just some friends and friends of friends. It was that way for the first year and half of playing. It was what I called ‘my underground period of an apprenticeship.’ I didn’t charge people for the gong baths. It was all donation based. I was happy just to get the experience. When I finally did create a poster, the gong baths exploded. I ended doing 2 gong baths a week and they were almost always filled up, with a waiting list. This in a small college town in Oregon.

The funny thing about this project is that for me it has always been about exploring sound, making sound journeys for myself and then sharing them. I have never worried about how many people were or were not coming. The important thing for me has always been about the quality of the experience. If it’s good, let the results take care of themselves. It just happens to also be a great recipe for attracting lots of listeners 🙂

This website uses cookies to improve your experience while you navigate through the website. Out of these cookies, the cookies that are categorized as necessary are stored on your browser as they are essential for the working of basic functionalities of the website. We also use third-party cookies that help us analyze and understand how you use this website. These cookies will be stored in your browser only with your consent. You also have the option to opt-out of these cookies. But opting out of some of these cookies may have an effect on your browsing experience.
Necessary Always Enabled
Necessary cookies are absolutely essential for the website to function properly. This category only includes cookies that ensures basic functionalities and security features of the website. These cookies do not store any personal information.
Non-necessary
Any cookies that may not be particularly necessary for the website to function and is used specifically to collect user personal data via analytics, ads, other embedded contents are termed as non-necessary cookies. It is mandatory to procure user consent prior to running these cookies on your website.
SAVE & ACCEPT